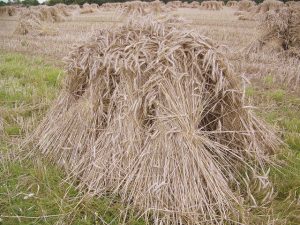 One of the delightful aspects of the parish is the growing and harvesting, in a traditional manner, of a very particular and unusual crop. The crop is a wheat and reed hybrid called Triticale and it is being grown for thatching. In the United Kingdom, the demand for high quality cereal straw for thatching exceeds supply, Triticale is an ideal crop for thatching particularly as many other wheat varieties suitable for thatching will become less available in the future. Here the sheaves are stacked together to form stooks, this allows both the sun and wind to get to the stalks to dry them. 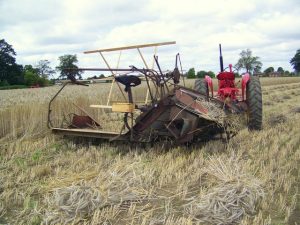 The early machines simply cut the crop and left it on the ground for gathering by hand into sheaves but by the last quarter of the 19th century, an effective knotting mechanism had been devised so that the machine could tie the sheaves as well. These binders remained in common use until ultimately replaced by the combined harvester in the middle years of the 20th century.

This website uses cookies to improve your experience while you navigate through the website. Out of these cookies, the cookies that are categorized as necessary are stored on your browser as they are essential for the working of basic functionalities of the website. We also use third-party cookies that help us analyze and understand how you use this website. These cookies will be stored in your browser only with your consent. You also have the option to opt-out of these cookies. But opting out of some of these cookies may have an effect on your browsing experience.
Necessary Always Enabled
Necessary cookies are absolutely essential for the website to function properly. This category only includes cookies that ensures basic functionalities and security features of the website. These cookies do not store any personal information.
Non-necessary
Any cookies that may not be particularly necessary for the website to function and is used specifically to collect user personal data via analytics, ads, other embedded contents are termed as non-necessary cookies. It is mandatory to procure user consent prior to running these cookies on your website.
SAVE & ACCEPT