Please see the attached consultation, sent on behalf of the Village Hall Committee (Independent of the Parish Council) , comments by 30th October please to;  Contacts:

The Messenger our parish news

Parishioners are concerned that the changes brought about by the lockdown have resulted in some people becoming less careful in their approach to road safety. As traffic increases again, perhaps driving faster than before, please be extra vigilant – skateboarding on the road, riding bicycles ‘without hands’, playing in the road, walking in groups spread across the road etc.,  etc., Thank you for your extra care and attention!

The new small memorial is now in place beside our young trees that were planted as part of our WW1 Armistice Centenary Celebrations last year at the Parish Notice Board just below The Seven Stars. We now also recognize the VE Day 75th Anniversary.
Our grateful thanks to Melissa Cole, our local artist blacksmith, for all her work and support in making this memorial possible. 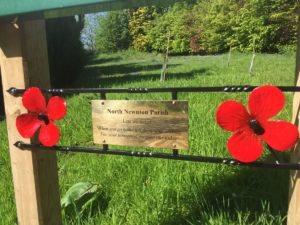 Unfortunately it has become necessary to close the Hilcott Village Hall until further notice. The contractors working on the floor have discovered additional problems with the fabric of the building. It will not be possible to hold Community Coffee Mornings at the Hall until the problem is solved.

At the Parish Council Meeting 9th September 2019, the Neighbourhood Plan Steering Group reported that they had decided to dissolve. On the 14th October 2019 at an Extraordinary Parish Council Meeting a motion was passed to continue to take forward the Neighbourhood Plan. We therefore need to form a new Steering Group and we are looking for community representatives from Bottlesford, Hilcott and North Newnton to lead the process with support from the Parish Council. If you are interested At, in the first instance please contact Gill Tatum, clerk on 07979866387 or clerk@nnpc.org.uk.

What3Words has divided the globe into 3m squares and given each one a unique 3 word address. It means everywhere can be located with just three words. For example ///kite.chats.dine will take you to a precise spot in a field next to the River Ouse in York. what3words is available as a free app for iOS and Android and online map at map.what3words.com. You can find out more about what3words here.
69 emergency services have confirmed they are using and accepting 3 word addresses
How do I use what3words in an emergency?
1. Find the 3 word address for your current location on the free what3words app for iOS and Android. It works offline – ideal for areas with unreliable data connection.
2. Share your 3 word address over the phone to the call handler.
3. The emergency service can then coordinate a response directly to the exact location where help is needed.
Any further questions to Councillor Tom Ellen (tom_ellen60@hotmail.com)

The Parish Council has a small budget for Charitable Donations and regularly receives requests from appropriate organisations. The Parish Council would very much like to hear from Parishioners as to which charities might be favoured for future donations.

1. Trust Deeds –Our Solicitors Wansbroughs drew up a Deed of Appointment and Retirement of Trustees. This was ratified on 30 August 2019. The three trustees named above are now appointed and the Deed stipulates that there should be at least seven management committee members of whom three can be the said Trustees. Co –option of three community group representatives can be effected, eg a member of the PC, a member of the PCC and one other, and hopefully two or three other members of the community who have an interest in the hall and its future

2. We need to hold an AGM once a year for the community and then two meetings a year, more if called by the Chair.

3. A Chairman, Secretary and Treasurer to be appointed at the AGM, and confirmation of other members. There will be a Code of Conduct and Rules for the Trust.

4. The land on which the Village Hall stands is now vested in an order with the Official Custodian

5. Floor Repair Fund – since late July the fund has increased substantially from £8800 (the letter to parishioners refers) and with donations, gift aid and proceeds from the community BBQ is now in the order of £10500 as of 31 August. We have applied to Community First/Hills Landfill Solutions for a grant of £2500, and hope to hear by 21 September if our bid is successful. Donations are still coming in and are needed to cover contingencies, and remedial work once the floor repair is done.

6. All being well, the contractor should be able to start work in mid to late October.

7. Plans are for a celebration party once the floor is repaired!

8. Thanks to all for your support so far.

Any cookies that may not be particularly necessary for the website to function and is used specifically to collect user personal data via analytics, ads, other embedded contents are termed as non-necessary cookies. It is mandatory to procure user consent prior to running these cookies on your website.